A disturbed clown out for revenge traps us in his sinister nightmare.

Once trapped in a decrepit amusement park, we get tossed, pulled and toyed with like a mouse caught by a particularly villainous cat.
Giant heads and creepy automatons are just a few of the weird creations this clown has manifested from his mind. As we get dropped, dragged and swung from one twisted corner of his mind to the other, we discover we’re not the first to pass through this nightmare and we won’t be the last.
Powerless over our fate and frightened by every move, we’re forced to confront the reality of this nightmare we may never wake from.

XD Ride Co. names and logos are property of MM Ride LP and not to be used or reproduced without consent.

Interactive movie titles and trailers are property of Triotech.  Not to be used or reproduced without consent.

Not all titles available at all locations and are subject to change without notice. 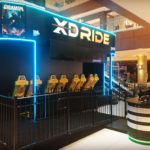